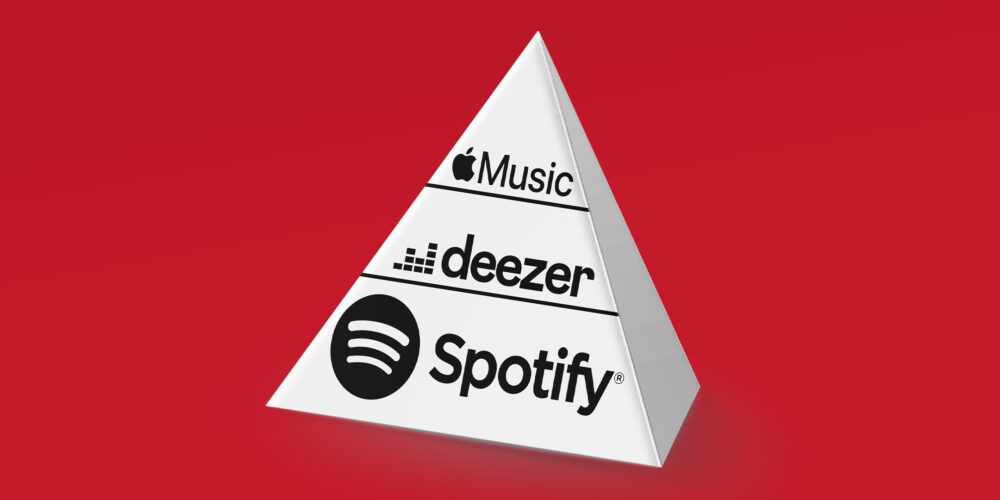 After we’ve shown you recently how greatly the Pay Per Stream (PPS) at Spotify, Apple Music, and Deezer can vary depending on the country, we will now compare the three streaming services directly. To sum up our findings briefly: Apple Music always pays more than Spotify. Deezer, too, always has a higher PPS than Spotify, except in Israel. And finally, with the exception of 8 countries, Apple always pays more than Deezer, as well.

On average, Apple Music pays 2.63 times as much as Spotify. In our last assessment, it was 2.84 times as much. In most countries, we observe a factor ranging between 1.5 and 2.5. In various Balkan states and in Jordan, it can even be between 6.34 (Serbia) and 10.43 (Macedonia). In the English-speaking countries, the factor is always below average and ranges from 1.54 (USA) and 2.29 (Ireland).

These two services are easy to compare, since both have a premium subscription as well as a free subscription option. In most countries, Deezer’s PPS is at most twice as high as Spotify’s. In 16 countries, you even get more than double the amount per stream, primarily in Eastern European countries but also in the US. Aside from the US with its factor of 2.63, the other English-speaking countries are either average or slightly below average.

As expected, you will receive more at Apple Music than at Deezer, since the former does without a free subscription option. However, it is only 38% more on average. In 8 of the countries we examined, you even get more per stream at Deezer than at Apple Music. In most countries, the difference is not too big. Only in Jordan, Italy, Macedonia, Bosnia, and Israel you’ll find a factor higher than 3. In the UK and Ireland, the factor is slightly above average, in Australia you would get approximately the same amount from either service, while for streams from the US and Canada, Deezer actually pays better than Apple Music.

For those who find these PPs numbers and factors to be too abstract, we present the concrete comparison between the English-speaking countries. For one million streams you would receive the following amount of money (in USD) in each country:

The next table shows you how many streams it takes from each country to get to USD 4,000:

The comparison clearly shows that it takes a much greater number of streams on Spotify to receive a good amount of money. But since Spotify has significantly more users than its two competitors, most musicians still receive their biggest share from Spotify.

Here you can find the complete assessment covering 45 countries: