Streaming subscriptions are growing more than ever before 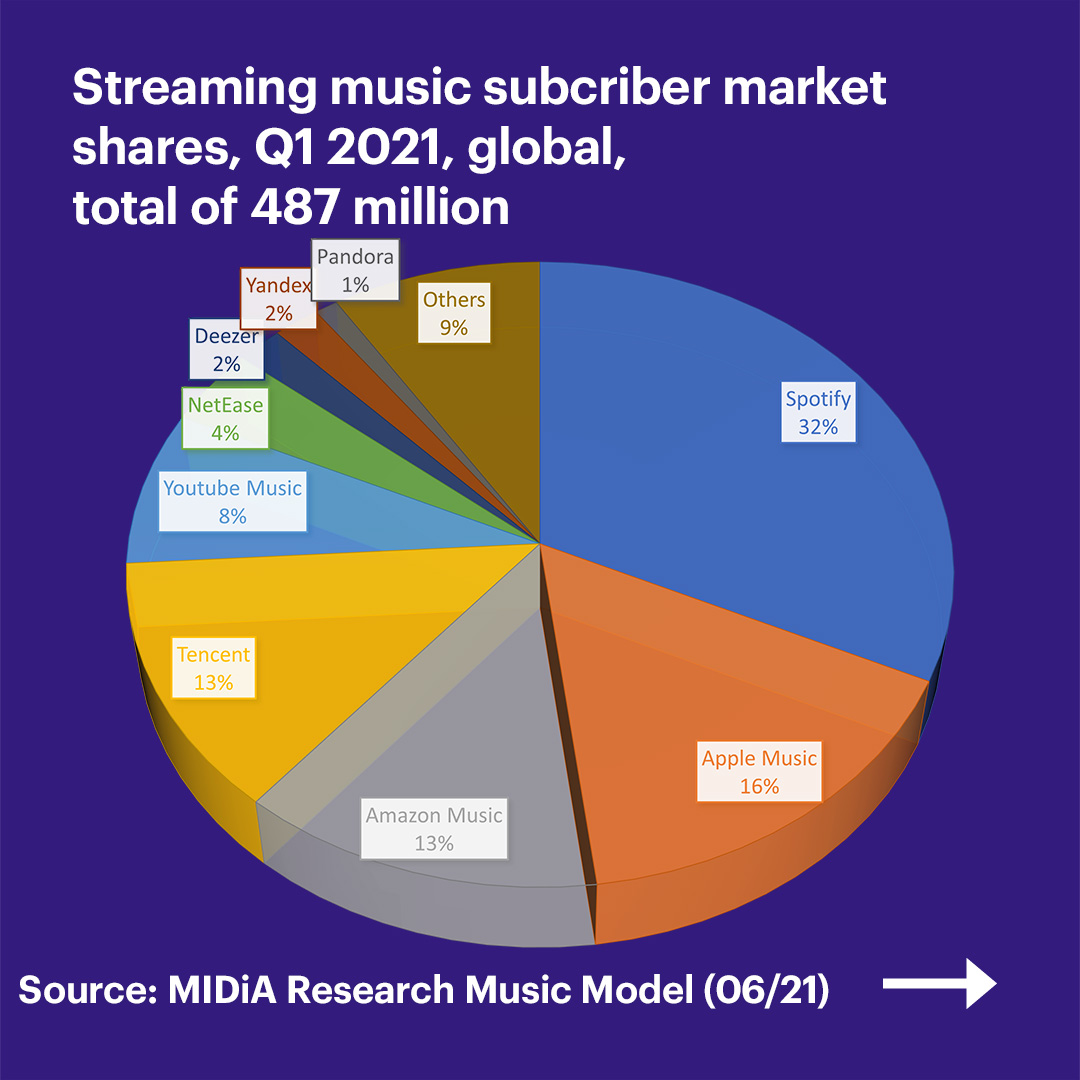 Worldwide, there are 487 million music listeners with a paid streaming subscription. There were 100 million new paying consumers joining in last year alone. More than a quarter of them opted for a Spotify subscription, which certainly also has something to do with Spotify’s recent expansion into different markets. Percentage-wise, however, YouTube Music, Tencent and Amazon experienced even higher growth. We’ve decided to take a closer look at how the streaming cake is cut.

The clear front runner is and continues to be Spotify, where 32% of the paying users can be found. Next in the rankings are Apple Music, Amazon, and Tencent, which together make up 42% of the paid subscriptions (Apple 16%, Amazon and Tencent 13% each). The remaining 26% are divided among YouTube Music (8%), Chinese provider NetEase (4%), Deezer and Yandex (2% each), Pandora (1%), as well as various other streaming platforms (9%).

Will the growth continue?

Last year’s growth of 100 million new subscribers surpasses that of 2019 by a long shot. Back then, the number of subscribers increased by 83 million. The numbers for the first quarter of 2021 are already out, as well, and show a growth of 19.5 million subscribers. Based on these figures, we can project a total of 78 million for the whole year. If the growth rate doesn’t increase, this would thus signify a clear downward trend compared to previous years.

Most of the growth comes from countries in Latin America, Asia, and other up-and-coming markets. This also explains why the revenues from subscriptions don’t grow as quickly as the number of subscribers, since most of these subscribers come from countries with lower subscription fees and ad revenues. You can learn more about how this affects the revenues for artists in our recent multi-part series on payouts per stream.

While Spotify saw a growth of only 20% and Apple Music even less with 12%, YouTube Music was able to increase theirs by an impressive 60%. Some analysts are already speculating that YouTube Music might be for Gen Z what Spotify was for millennials back in the day. We will definitely keep a close watch on the developments of both YouTube Music and the streaming market in general and keep you updated on the latest news and trends.